Freda Huson behind the original cabin where she has lived since 2011 at Unist'ot'en camp near Houston, British Columbia on Wednesday, December 19, 2018. Huson has been the spokesperson for the Unist'ot'en clan for most of the last decade and has only recently been asked to step aside after a court granted an injunction against her. Amber Bracken for The New York Times 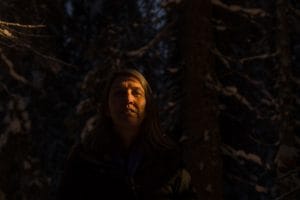